Charging an Electric Car: All You Need to Know

Electric cars are here to stay. Many have already switched over when purchasing a new vehicle, and it seems that it is the government’s intention that we all switch in the near future. This means that equipping our homes so they are capable of charging an electric car is paramount.

The Road to Zero Strategy, which was published in July 2018, set out the road map to end the sale of new conventional petrol and diesel cars and vans by 2040, along with some measures to help us get there. Measures include a push for chargepoints to be installed in newly built homes, where appropriate.

The government has, however, subsequently stated that it will bring forward the ban on new petrol and diesel vehicle sales to 2035, which will also include hybrid vehicles. As such, we may need our homes to be set up for charging an electric car quicker than first anticipated.

This guide will explain all about charging an electric car at home, including how to make the most of the grants currently available.

In many ways, electric cars are actually no different from any other car from an aesthetic perspective and in the way that they are operated. Some have even become aspirational and iconic, including luxury SUVs and sleek sports vehicles.

There is currently a grant of £3,500 available for new, eligible low-emission cars. The plug-in car grant is only funded until April 2020 and it is not clear what will happen after that. It would be prudent to check the latest information before assuming that you will benefit from this grant.

(Businesses can also benefit through the plug-in van grant, which funds 20% of the cost of the new vehicle up to a maximum of £8,000, but the vehicle must have emissions of less than 75g CO2/km and can travel at least 10 miles with zero emissions.)

When buying an electric car, you have two main options:

With hybrid cars it’s important to note that sometimes the petrol motor may be no more than a generator and serve as a battery charger rather than a direct drive motor. At the other end of the hybrid scale, the electric motor can be secondary to the petrol motor and has no plug-in charging facility.

Either way, it is important to establish at what stage the petrol engine will kick in, when purchasing, so that you can maximise the efficiency according to your use patterns.

We may also see the introduction of electric / hydrogen hybrid vehicles. Hydrogen vehicles are fully driven by a battery but a hydrogen fuel cell recharges the battery.

These vehicles are a little less efficient than pure electric cars, as it takes power to convert the hydrogen into energy, but the benefits are that refuelling is significantly faster so this could be attractive to long-distance travellers and commercial and freight vehicles.

What’s Involved When Charging an Electric Car at Home?

When we do make that switch, most of us will be charging an electric car at home — and that has implications for a self build or extension/remodelling project.

You may think that it is ok to simply plug the vehicle into a standard 13 Amp wall socket. This is possible, but you need to realise that even with current battery capacities, you would still need to charge the vehicle for over 12 to 15 hours. For vehicles with larger capacity batteries this could be even longer.

What’s the Best Solution for Charging an Electric Car?

The best solution for charging an electric car is a dedicated charging point that usually has a minimum capacity of 32 Amps and a resultant charging time of five to seven hours. The latest chargepoints are also ‘smart’.

Even though chargers have not yet been standardised, or you may not yet have an electric car, it is well worth planning at least the cable into the build rather than retrofitting this at a later date. As such, it is prudent to plan this into your building project and include it in the electrician’s brief.

The Ford Connected Wallbox is one example of how car manufacturers are innovating in order to meet increasing demand for charging electric cars at home. 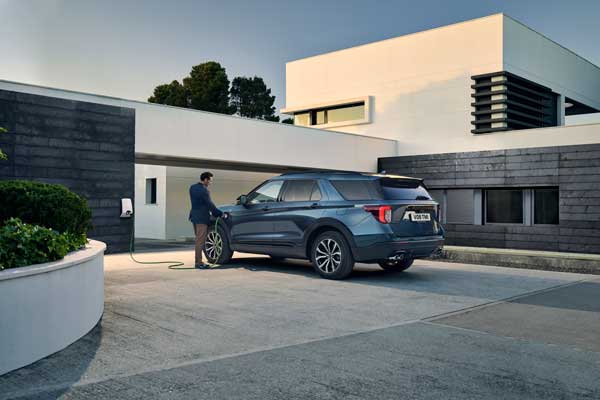 The Ford Connected Wallbox provides over 27 miles of range every hour, providing a full charge for a Ford electric vehicle overnight. This smart chargepoint can be paired with the FordPass smartphone app, allowing the driver to monitor the electricity used each time the vehicle is charged at home, as well as manage access to the Wallbox through its lock function.

Grants for Installing a Chargepoint at Home

The Electric Vehicle Homecharge Scheme offsets 75% of the cost of installing a chargepoint at home, up to a maximum of £500.

You must, however, meet certain criteria, including:

This ultimately means that self builders and renovators can not benefit unless they already own an eligible electric car or have one on order.

Workplace charging points are also funded through £300 vouchers for the first 20 chargepoints installed by an employer.

If you have, or are planning to install, solar photovoltaic (PV) panels it makes sense to use as much of the generation as you can. This means an electric vehicle can then potentially be charged for a large percentage of the year for almost free.

Now that would be fine if you happen to keep your car at home during the day. For most of us though, we need to use the car during the daylight hours. It is then only at night that we would like to recharge the vehicle when there is unfortunately no sunshine power to benefit from.

We also need to know how much energy we actually need for the car. A 4kWp PV array will generate around 30kWh per day on a bright summer day. Some of this will be used in the home and the rest will not recharge more than around 50 miles of energy. (During less bright days the available energy will be even less.)

One solution is a home battery. You can charge the battery during the day and potentially use that battery to recharge your car at night, benefitting from any free daytime generation.

Home batteries have got better in the past few years but the average capacity of a home battery is around 14kWh, whereas a car battery could be anywhere from 30kWh to 100kWh. Therefore, using home batteries for charging an electric car would require a lot more batteries and PV panels than you would normally install.

Nissan, who has invested over $4 billion on the development of their electric cars and batteries, have responded to the market for home battery systems and released the xStorage solution, which is a ‘second life battery solution’. This means that the system uses the batteries that have already been used in Nissan cars and recycles them for use in home battery systems.

Tesla has been pitching this in their Powerwall and Powerwall 2 systems.

Other electric vehicle manufacturers will also be offering these types of solutions as their electric car ranges develop.

There is also the argument that the vehicle itself could be the battery for the home. During the peak times the electric vehicle battery could be used to provide power back to the home and then it could be recharged later that night when the grid demand is lower. This is not currently an option in the UK, but could well be part of the future.

David Hilton is an expert in sustainable building and energy efficiency, and is a director of Heat and Energy Ltd. He is also a speaker at the Homebuilding & Renovating Shows – get two free tickets here.